All Aboard The eCommerce Money Train… Choo-Choo!!

The eCommerce train is about to leave its station…
Jump on board before you get left in the dust!

Here’s the deal, we’re all looking for opportunities to boost income and crush our old ROI’s. It’s no secret that building a profitable business in today’s environment is rapidly becoming an ever-increasing exercise in “guess the next trend!”

Honestly, it’s a “pain in the behind” and for those of us who are perhaps still starting out, it’s also pretty difficult to get the ball rolling, let alone having it actually expand and grow like some sort of wealth-producing-snowball that just grows bigger and richer, paying back dividends with every cycle down it’s path.

Things are changing and you need to strongly consider if you want to change with it or risk getting left behind… probably regretting not jumping on that next money train when you had the chance.

People involved in eCommerce are making a lot of money right now. In some cases even MILLIONS a week with affiliate marketing! Seriously, look into it, that’s not a joke… millions a week. How are they doing it? Well that’s quite simple…

Want to see something interesting? Sure you do, so check this out. 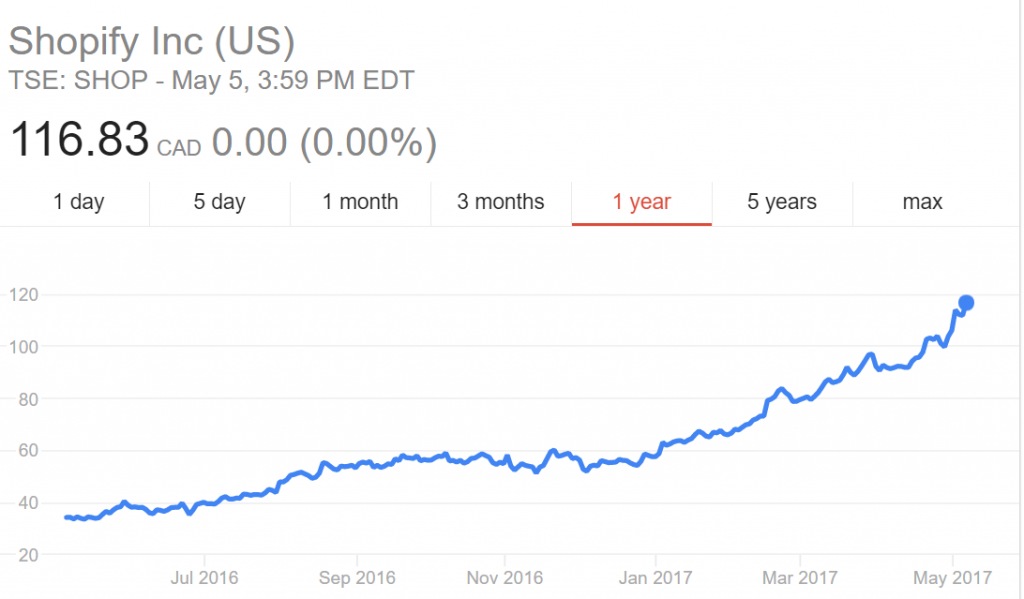 Go over to Google right now and type in “shopify stock” and have a look at that graph. What you’re going to see is that it’s been on a very steady up-trend for years and it isn’t showing signs of slowing down anytime soon. This shows how strong and popular their platform is, it also shows how profitable it is which means just one thing. If they’re making money, it’s because their user-base is making money! Since they specialize in providing a digital storefront for marketers like us, they don’t make money until we make money, they don’t grow until more people decide to join their platform and use it to pull in sales day after day! And as I mentioned… their stock is still growing, think about that a moment.

Why is it so successful?

It’s fairly easy to use for starters. If you’re familiar with WordPress (and even if you’re not) you can liken it to a plug & play web-store builder in the same way WordPress is plug & play for blog and website building.

They both use extremely easy, customizable plug-ins to give your shop functionality which would otherwise cost you insane money to have developed by a professional coder.

They are both kept up-to-date with security checks and performance optimizations to stay on-top of the times where technology is concerned, meaning your shopify store will never be left outdated because let’s be real… doing all that yourself would just be hard and expensive!

They’re both EXTREMELY simple to install and use, they are “on demand” and fully functional right out the box, all you have to do is set it up and you’re ready to rock & roll.

That being said however, let’s talk about the setup process for a moment.

A lot of people get confused how it’s done, especially if they’ve never seen the ‘back end’ before. That’s perfectly understandable, we’ve all been there so all you really need is a helping hand to assist you with getting set up.

The setup process is something we go into detail with over at our private forum, we discuss the steps you should go through and walk you through it all so you can get set up and take a hearty piece of the shopify pie for yourself. As a strong educated affiliate marketer you are best positioned to make money from this trend. Not only does our training teach you all you need to know about being a successful affiliate, but we also show you how to take your business to the next level using your ecommerce affiliate marketing skills to your advantage.

In addition to our premium ecommerce affiliate programs we have added in a full Shopify Guide! Once you’ve joined our ranks in the Affiliate Forum,  you can take full advantage of all the cool training we offer. That will be way more than enough to get you rolling and believe me when I tell you that it will take some work (especially in the beginning) but I mean…

Some People Are Making Millions In Sales A WEEK!!

Don’t you think it’s worth whatever amount of work it takes (which honestly isn’t all that much after the start up phase) just to get even a fraction of that massive money-pie?

Check out what I’m talking about in detail if you’re interested over at our official & exclusive ecommerce Affiliate Forum we have developed!  We’re keeping this shopify and ecommerce training for our member’s only for a very good reason! Get on board with the rest of us, before the train leaves the station for good!

Affiliate World Conference – Cashing in On Whitehat FB & Other Traffic